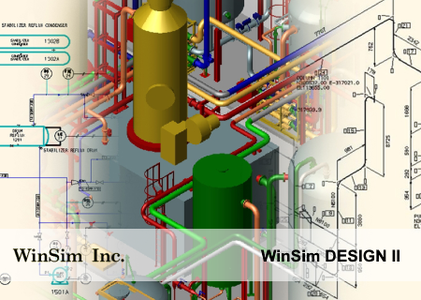 The software developer WinSim is pleased to announce the availability of WinSim DESIGN II Version 16.10. This is a release with both fixes and upgrades.

– Fixed the Stream Data Box to include the component names after the component name maximum widths were changed in the 16.09 release
– Put in a maximum size of 100 MB for the stored Design II output file
– Fixed the Expander to show the correct type of calculation method, Entropy (isentropic) or Polytropic (volume change)
– Fixed the bubble point temperature calculation of a pure water stream at 20.00 Barg which was being rejected as not being consistent with previous bubble point temperature calculations of the same mixture
– Removed the excess printing of the message “GUIDELINE: Vapor release channels may be needed to promote vapor flow”
– Removed the warning messages “WARNING: KETTLE SHELL TYPE IS NOT AVAILABLE FOR RATING. (szhxer)” and “WARNING: CALCULATIONS PERFORMED FOR E SHELL. (szhxer)” since kettle heat exchanger rating has been supported for many versions
– Miscellaneous small enhancements and fixes

One click and you’ll be convinced: DESIGN II FOR WINDOWS is the easy way to do simulation. WinSim’s original process simulator for Windows is intuitive and inter-operable with other Windows applications. Its look and feel provides an instant familiarity for experienced Windows users. The graphical interface means there are no special commands or function keys to remember. Just draw your flowsheet with point-and-click simplicity. Double click on flowsheet equipment and streams for specification dialog boxes to appear. Once your flowsheet is complete, DESIGN ll for Windows will even validate your input before computing the simulation results. Export stream and equipment results to Microsoft Excel, or display the complete results as a text file. The simulation is fast, easy, and error free.

With a forty-five plus year history of continued development and refinement, DESIGN II has long been a leader in process simulator innovation. Many DESIGN II features, such as Inline FORTRAN and rigorous column calculations, have set the standard for process simulation. Because of its proven strengths, DESIGN II is the simulation engine underlying DESIGN II FOR WINDOWS. DESIGN II is a powerful and comprehensive process simulation computational engine, which performs complete heat and material balance calculations for a wide variety of pipeline and processing applications. The simulator’s easy-to-create flowsheets allow process engineers to concentrate on engineering, rather than computer operations. A minimum amount of input is required to utilize DESIGN II FOR WINDOWS. WinSim’s simulator offers advanced features, such as sizing and rating of heat exchangers and separators, within the flowsheet. The DESIGN II FOR WINDOWS database contains 1,200 pure components, and others can be added via CHEMTRAN. Also included is a crude library with 38 world crudes, already characterized and at your fingertips.

This video is a quick sample of how to build an expander flow sheet using Design II for Windows version 16.
WinSim develops and markets DESIGN II for Windows, a steady-state and dynamic process simulator. We have been doing this since 1995 when we purchased the rights to the program from ChemShare Corporation . WinSim has over 2,000 active users of DESIGN II throughout the world. The company is based in the Houston, Texas metropolitan area.

NOTE: We use Microsoft Excel and Word for Windows as example programs; these are licensed separately through other
suppliers