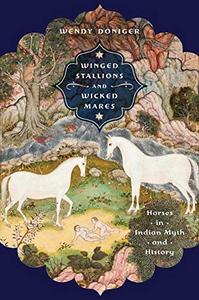 Horses are not indigenous to India. They had to be imported, making them expensive and elite animals. How then did Indian villagers―who could not afford horses and often had never even seen a horse―create such wonderful horse stories and brilliant visual images of horses? In Winged Stallions and Wicked Mares, Wendy Doniger, called “the greatest living mythologist,” examines the horse’s significance throughout Indian history from the arrival of the Indo-Europeans, followed by the people who became the Mughals (who imported Arabian horses) and the British (who imported thoroughbreds and Walers). Along the way, we encounter the tensions between Hindu stallion and Arab mare traditions, the imposition of European standards on Indian breeds, the reasons why men ride mares to weddings, the motivations for murdering Dalits who ride horses, and the enduring myth of foreign horses who emerge from the ocean to fertilize native mares.