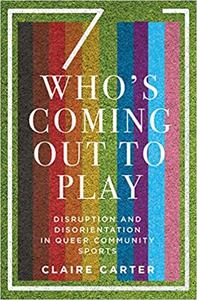 Queer community sports leagues, by their sheer numbers, are changing the energy and space of school gyms and community recreational spaces. Some leagues are well-established – having been in existence for over twenty-five years – whereas others are relatively new, but their collective presence tells stories about the shifting dynamics of queer communities in Canada. Who’s Coming Out to Play considers the potential of queer community sports to disrupt notions of the embodiment of gender and community, while maintaining an awareness of numerous factors that limit this potential. Exploring queer teams and leagues of varying sizes and from various locations, this book focuses on leagues that have previously identified as women’s or lesbian and are now becoming trans and genderqueer inclusive. Queer community leagues are based in a commitment to community building, prioritizing fun, socializing, and inclusivity over competing or winning. As a result of these commitments, these spaces and the people who come to play in them reflect new ways of being in and with bodies, different ways of embodying gender, and new or different forms of engagement – notably distinct “rules of play” – within sporting arenas. Who’s Coming Out to Play paints a vivid picture of the lived experiences of queer bodies in queer sporting spaces, exploring both the possibilities and the continued problems they face.