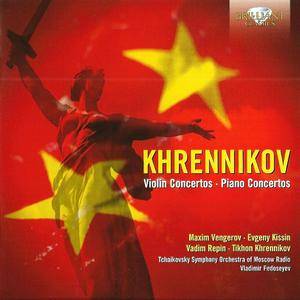 Tikhon Khrennikov was certainly an equivocal figure in the history of 20th-century Russian music. A composer with a tendency towards popular theatrical genres and lyricism, the naively optimistic nature of his music was soon noticed by the Soviet government, which took Khrennikov under its wing and appointed him Secretary of the reorganised Union of Composers in 1948 – a post he held for no less than 43 years. During his tenure in the role, Khrennikov witnessed the persecution of numerous artists who refused to comply with the USSR’s dictated enthusiasm for all things socialist in musical culture. Such behaviour surely confirms his political stance, and yet it is known that Khrennikov on more than one occasion came to the aid of several musicians, protecting them from arrest and helping to forge the careers of many young and talented artists.

This release centres around the Russian composer’s concerto output, coupling Nos. 2 and 3 for the piano with those he wrote for the violin. Energetic movement and infectious emotion are in no short supply throughout, and Khrennikov – who appears as the soloist for Piano Concerto No.3 – must have delighted in the fact that three of Russia’s most famous ‘wunderkinder’ (Evgeny Kissin, Vadim Repin and Maxim Vengerov) appeared alongside for the live recording of these works. Each of the musical starlets subsequently abandoned the USSR, having barely crossed the threshold into adolescence; this recording therefore offers a rare glimpse into their early careers, playing the music of a man who spent his whole life standing guard over the ‘iron curtain’.

This recording is historic in the sense that it features 3 Soviet child prodigies: Yevgeny Kissin, Maxim Vengerov and Vadim Repin, now household names in western musical life, then the perfect examples of successful Soviet education and training. Khrennikov himself is the soloist in his 3rd piano concerto.

Yes, the line-up of young soloists is breathtaking. And the music is not wholly without interest. A paragon of the Soviet establishment and hence a generally demonic presence in the history books, Khrennikov (b 1913) composed in the sort of approachable vein best calculated to win friends in high places. From 1948 until 1991 he was Secretary of the Union of Composers, charged with implementing Party doctrine. He made his career helping to organise the infamous Zhdanov denunciations of such big-name composers as Prokofiev and Shostakovich. Unexpectedly he proved wily enough to hold on to his post in relatively liberal times. Today he likes to say that it was his ideological rectitude and skilful politicking that protected more radical composers. He may or may not be right, though, given the necessarily ambiguous content of absolute music, he is surely pushing his luck. Galina Vishnevskaya for one pins him down as ‘a clever, scheming courtier’.

In this live recording of what was presumably a 75th birthday concert, he is well served by Vladimir Fedoseyev and his orchestra, the present-day manifestation of the USSR broadcasting band with which Rozhdestvensky was associated in the 1960s and 1970s. Three of the four works are performed by adolescent wunderkinder, and Khrennikov also proves himself an accomplished pianist. Devotees of Maxim Vengerov who already have his earliest recorded recital (Biddulph, 4/90) will find here the same astonishing, high-octane playing from the then 13-year-old prodigy. Be warned however: there are no notes on the music and the track listing not only gets many of the timings wrong but also puts the works in the wrong order.

The Second Piano Concerto (placed second rather than third and occupying tracks 4 to 6) begins provocatively with a 12-note row before lapsing back into generalised hustle and bustle; the closing pages return to the pensive opening mood. This score, whose models would seem to include the more distinguished Second Piano Concertos of Prokofiev, Saint-Saens and Bartok, dates from 1971 and sets the stylistic template for the later pieces. In the slow movement of the Second Violin Concerto (1975), the composer again attempts to incorporate more sophisticated chromatic elements, but there isn’t much subtlety in the garish outer movements. The brusque cheerfulness and cinematic excess of Piano Concerto No 3 (1983) are perhaps hardest to take, exacerbated by the raw primary colours of the orchestral brass and the fact that Khrennikov is still ripping off ideas from the geniuses he censured 35 years before. As throughout, his three-movement construction is rudimentary; there isn’t enough real personality, and what there is may strike you as unsympathetic. Once you’ve sampled Khrennikov’s music, Khachaturian’s will seem subtle. Even so, the man’s idiom is a little more exploratory than it needed to be, and the present package certainly fills in some blanks.

What a line-up; Repin, Kissin, Vengerov! Khrennikov certainly commanded celebrity status and was able to call on these stars at the very start of their careers. No doubt Khrennikov’s cultural supremo status helped. He was appointed by Stalin as permanent director of the Composers’ Union of the USSR – a position he held for 43 years. That very status and his role in connection with the denunciation of Prokofiev, Shostakovich and others has played its part in the neglect of his music. As if politics, even of the most extreme persuasion, had anything to do with musical merit.

In this disc of four Khrennikov concertos we are granted the privilege of making up our own minds. Each is in three movements. Each is compact – no more than twenty minutes long and as short as just over fifteen minutes. Each is in C major.

The First Violin Concerto is flashy and brash in the outer movements rather like the Kabalevsky Violin Concerto. Sparks fly and lightning flashes at breakneck speed with memories of the Khachaturyan’s concerto slipping in. The andante espressivo picks up on the oriental enchantment that distinguishes so much Russian music stretching from the late 19th century onwards.

The Second Piano Concerto starts audaciously with a long introduction for the piano unaccompanied – the orchestra, silent until about 2.56 when the strings enter – sounding rather tortured it has to be said. The second movement sonata is a thunderous neo-Lisztian cauldron with Soviet style motor rhythms criss-crossing the landscape. Kissin relishes all of this as much as the glittering light-hearted rondo giocoso which is transformed into a far from bombastic thoughtful andantino which ends the concerto quietly.

The Second Violin Concerto begins in the usual access of virtuosic activity this time recalling Rawsthorne in the triumphal outer movements. The big Moderato second movement emerges after the allegro con fuoco ends self-effacingly. It has the feeling of an extended love song (tr.8 2.12) with the violin as the suitor. The theme is taken over by the orchestra and rises to a bombastic blare but even as this falls away the romantic theme returns in self possessed splendour. Vengerov is on fine form and even draws a bravo from the otherwise reticent Moscow audience.

The composer himself is soloist in the Third Piano Concerto. It carries the latest opus number in this selection. Like the Second Concerto it starts with the piano unaccompanied establishing itself as the Alpha male before the orchestra puts in an appearance. The orchestra enter with a pompous march theme with the soloist acting as raucous hortator rather than combatant. The music rises to a Technicolor climax with the unblushing use of crashing cymbals (tr.10 6.10). It ends in a sort of eerie postlude with the wraithlike violins ‘rattling their chains’ as the piano says a long farewell. Rather good. Another Moderato follows, in which the piano deliberately picks out a highly romantic theme with a musing Rachmaninovian character but edgily stony. As in the first movement so here; the music rises this time to a bruising brass orated climax (3.02) then falls away into silence ushered by the piano seemingly exhausted by the brazen climax. The finale’s modest dissonance does little to dilute the effect of some excitably assertive music.

There is applause at the end of each of these concert performances. Judging by the photograph of all the soloists grouped around the composer they were given at a single celebratory concert.

How best to sum his music up? It is showy but not without tenderness. Khrennikov can be compared with Kabalevsky but lacks that composer’s ready gifts. His music tends to be more vinegary than Kabalevsky’s and his themes do not have instantly captivating immediacy. There is dissonance in his music to a noticeably greater degree than Kabalevsky. This is not as extreme as say 1970s vintage Pärt (whom he no doubt villified) being closer to Rawsthorne.

TOC of the extracted CD