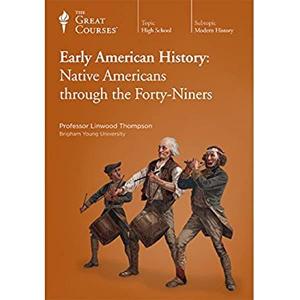 I ripped this from DVD and scanned the workbook and study guide. The original series was recorded in 1995.

Make American history come alive for your student with these 30 excellent lectures that cover the first half of America’s fascinating history from the settlement of the continent by Native Americans through to the California Gold Rush of 1849. Crafted with unusual creativity and innovation, each lecture is “taught” by a particular character. Professor Thompson “becomes” a Viking explorer, Christopher Columbus, revolutionary war foot soldiers, a French trapper, and a host of other characters who provide a first-person perspective on early American history.

Students will learn the differences between Southwest and Eastern Woodland Native Americans; what led Europeans such as Columbus to the New World; the roles European powers – Spain, England, France, and the Netherlands – played in their colonies and how those colonies interacted; the struggles and farsightedness of Founding Fathers Jefferson, Hamilton, Franklin, and others in the creation of this new nation; how canals and railroads accelerated the expansion West; and so much more.

“American history is a rich story of the events that have shaped modern American society,” notes Professor Thompson. “Allow the stories to transport you back in time to the initial shaping of a nation with diverse cultural roots. I love American history! I hope you will love it too.”

01 Pre-Columbian America
02 Discovery and Exploration of America
03 The Virginia Colony
04 Pilgrims and Puritans
05 Other European Colonies
06 Witches, Quakers, and Catholics
07 Life in Colonial America
08 Swashbucklers, Smugglers, and Slavers
09 The Great Awakening and Enlightenment
10 Wars with France
11 Seeds of Revolution and War
12 Men of the Revolution
13 Declaration of Independence
14 Revolutionary War—On Land and Sea
15 The National Government and the War’s End
16 Stretching the Western Boundaries
17 The Constitution
18 Washington and the New Government
19 French and American Revolutions
20 Dividing of Patriots—The Two Party System
21 Era of Jefferson
22 War Hawks, Indians, and the War of 1812
23 Industrial Revolution
24 Cities and the Transportation Revolution
25 Era of Jackson
26 Texas
27 The Trails West
28 Colonizing the West—The Mormons
29 Mexican Territories and War
30 West to California

also You can find my other last: History-posts