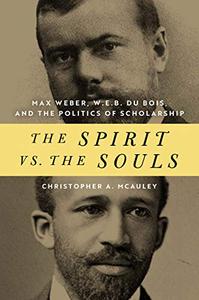 Despite the extensive scholarship on Max Weber (1864–1920) and W. E. B. Du Bois (1868–1963), very little of it examines the contact between the two founding figures of Western sociology. Drawing on their correspondence from 1904 to 1906, and comparing the sociological work that they produced during this period and afterward, The Spirit vs. the Souls: Max Weber, W. E. B. Du Bois, and the Politics of Scholarship examines for the first time the ideas that Weber and Du Bois shared on topics such as sociological investigation, race, empire, unfree labor, capitalism, and socialism. What emerges from this examination is that their ideas on these matters clashed far more than they converged, contrary to the tone of their letters and to the interpretations of the few scholars who have commented on the correspondence between Weber and Du Bois.

Christopher McAuley provides close readings of key texts by the two scholars, including Weber’s The Protestant Ethic and the Spirit of Capitalism and Du Bois’s The Souls of Black Folk, to demonstrate their different views on a number of issues, including the economic benefits of unfree labor in capitalism. The book addresses the distinctly different treatment of the two figures’s political sympathies in past scholarship, especially that which discredits some of Du Bois’s openly antiracist academic work while failing to consider the markedly imperialist-serving content of some of Weber’s. McAuley argues for the acknowledgment and demarginalization of Du Bois’s contributions to the scholarly world that academics have generally accorded to Weber. This book will interest students and scholars of black studies, history, and sociology for whom Du Bois and Weber are central figures.