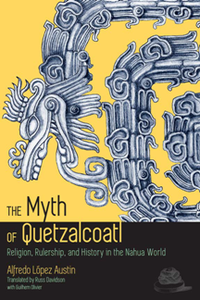 The Myth of Quetzalcoatl is a translation of Alfredo Lopez Austin’s 1973 book Hombre-Dios: Religion y politica en el mundo nahuatl. Despite its pervasive and lasting influence on the study of Mesoamerican history, religion in general, and the Quetzalcoatl myth in particular, this work has not been available in English until now.

The importance of Hombre-Dios and its status as a classic arise from its interdisciplinary approach, creative use of a wide range of source material, and unsurpassed treatment of its subject—the nature and content of religious beliefs and rituals among the native populations of Mesoamerica and the manner in which they fused with and helped sanctify political authority and rulership in both the pre- and post-conquest periods. Working from a wide variety of previously neglected documentary sources, incorporating myth, archaeology, and the ethnography of contemporary Native Americans including non-Nahua peoples, Lopez Austin traces the figure of Quetzalcoatl as a “Man-God” from pre-conquest times, while Russ Davidson’s translator’s note, David Carrasco’s foreword, and Lopez Austin’s introduction place the work within the context of modern scholarship.

Lopez Austin’s original work on Quetzalcoatl is a pivotal work in the field of anthropology, and this long-overdue English translation will be of significance to historians, anthropologists, linguists, and serious readers interested in Mesoamerica.