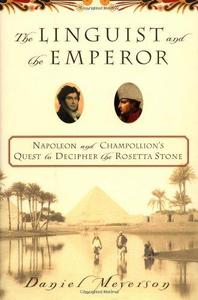 The deciphering of the Rosetta stone was one of the great intellectual triumphs of all time, unlocking the secrets of thousands of years of Egypt’s ancient civilization. Yet in the past two centuries, the circumstances surrounding this bravura feat of translation have become shrouded in myth and mystery. Now in his spellbinding new book, Daniel Meyerson recounts the extraordinary true story of how the lives of two geniuses converged in a breakthrough that revolutionized our understanding of the past. The emperor Napoleon and the linguist Jean-Francois Champollion were both blessed with the temperament of artists and damned with ferocious impatience—and both of them were obsessed with Egypt. In fact, it was Napoleon’s dazzling, disastrous Egyptian campaign that caught the attention of the young Champollion and forever changed his life. From the instant Champollion learned of Napoleon’s discovery of a stone inscribed with three sets of characters—Greek, Coptic, and hieroglyphic—he could not rest. He vowed to be the first to crack the mystery of what became known as the Rosetta stone. In Daniel Meyerson’s sweeping narrative, the haunting story of the Rosetta stone—its discovery in a doomed battle, the intrigue to secure it, the agonizing race to unlock its secrets, and the pain it seemed to inflict on all who touched it—reads like the most engrossing fiction. Napoleon, despite his power and glory, suffered repeated betrayals . . . by his Empress Josephine, on the battlefield, and by history itself. Champollion, though he triumphed intellectually, ultimately endured his own terrible tragedy. As background and counterpoint to the stories of the brilliant linguist and the visionary emperor, Meyerson interweaves the ancient tales of love, intrigue, brutal death, and miraculous rebirth that were hidden for centuries on the walls of Egyptian tombs—stories that Champollion finally made accessible to the world. Blending history, politics, intellectual passion, and a deep understanding of the human heart, The Linguist and the Emperor is a stunning tapestry of breakthrough and ambition, grandeur and vanity, power and pain. Carrying on the tradition of The Professor and the Madman and Longitude, Meyerson has fashioned a masterpiece of meticulous history and astonishing storytelling.