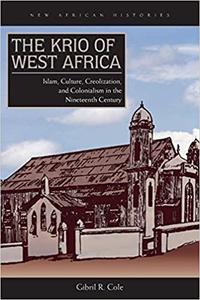 Sierra Leone’s unique history, especially in the development and consolidation of British colonialism in West Africa, has made it an important site of historical investigation since the 1950s. Much of the scholarship produced in subsequent decades has focused on the “Krio,” descendants of freed slaves from the West Indies, North America, England, and other areas of West Africa, who settled Freetown, beginning in the late eighteenth century. Two foundational and enduring assumptions have characterized this historiography: the concepts of “Creole” and “Krio” are virtually interchangeable; and the community to which these terms apply was and is largely self-contained, Christian, and English in worldview.

In a bold challenge to the long-standing historiography on Sierra Leone, Gibril Cole carefully disentangles “Krio” from “Creole,” revealing the diversity and permeability of a community that included many who, in fact, were not Christian. In Cole’s persuasive and engaging analysis, Muslim settlers take center stage as critical actors in the dynamic growth of Freetown’s Krio society.

The Krio of West Africa represents the results of some of the first sustained historical research to be undertaken since the end of Sierra Leone’s brutal civil war. It speaks clearly and powerfully not only to those with an interest in the specific history of Sierra Leone, but to histories of Islam in West Africa, the British empire, the Black Atlantic, the Yoruban diaspora, and the slave trade and its aftermath.