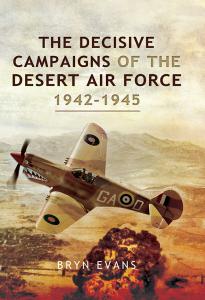 “Absorbing . . . this is an excellent account of air operations and tactics of the air battles in North Africa, the Mediterranean, and Italy.”—Firetrench

Compared to the RAF’s Fighter and Bomber Commands, the Desert Air Force (DAF) is far less well known, yet its achievements were spectacular.

While the Axis forces used the many rivers and mountains of Tunisia and Italy to slow the Allies’ advance, DAF was there to provide that extra mobile firepower—the artillery from the sky. They were the first multinational air force, and the first to introduce air controllers in the front lines of the battlefield.

With first-hand accounts by veteran airmen from Britain, Australia, Canada, New Zealand, South Africa and the USA, this book “tells the previously untold story of how the DAF was the most decisive single factor in winning the three battles of El Alamein, and victory in the North Africa and Italy campaigns” (Yorkshire Evening Post).

“A most welcome addition to the historiography of the air aspects of the war in North Africa and the wider Mediterranean . . . [it] will have considerable appeal to a wide ranging readership, but especially those interested in the tactical detail and personal experiences of the airmen involved in the various campaigns.”—British Journal for Military History