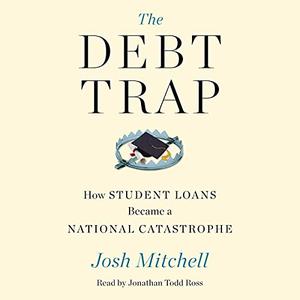 From acclaimed Wall Street Journal reporter Josh Mitchell, the dramatic, untold story of student debt in America. In 1982, a new executive at Sallie Mae took home the company’s financial documents to review. “You’ve got to be shitting me,” he later told the company’s CEO. “This place is a gold mine.” Over the next four decades, the student loan industry that Sallie Mae and Congress created blew up into a crisis that would submerge a generation of Americans into $1.5 trillion in student debt. In The Debt Trap, Wall Street Journal reporter Josh Mitchell tells the untold story of the scandals, scams, predatory actors, and government malpractice that have created the behemoth that one of its original architects called a “monster”.