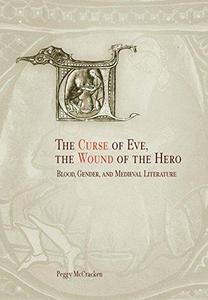 In The Curse of Eve, the Wound of the Hero, Peggy McCracken explores the role of blood symbolism in establishing and maintaining the sex-gender systems of medieval culture. Reading a variety of literary texts in relation to historical, medical, and religious discourses about blood, and in the context of anthropological and religious studies, McCracken offers a provocative examination of the ways gendered cultural values were mapped onto blood in the Middle Ages.

As McCracken demonstrates, blood is gendered when that of men is prized in stories about battle and that of women is excluded from the public arena in which social and political hierarchies are contested and defined through chivalric contest. In her examination of the conceptualization of familial relationships, she uncovers the privileges that are grounded in gendered definitions of blood relationships. She shows that in narratives about sacrifice a father’s relationship to his son is described as a shared blood, whereas texts about women accused of giving birth to monstrous children define the mother’s contribution to conception in terms of corrupted, often menstrual blood. Turning to fictional representations of bloody martyrdom and of eucharistic ritual, McCracken juxtaposes the blood of the wounded guardian of the grail with that of Christ and suggests that the blood from the grail king’s wound is characterized in opposition to that of women and Jewish men.

Drawing on a range of French and other literary texts, McCracken shows how the dominant ideas about blood in medieval culture point to ways of seeing modern values associated with blood in a new light, and how modern representations in turn suggest new perspectives on medieval perceptions.