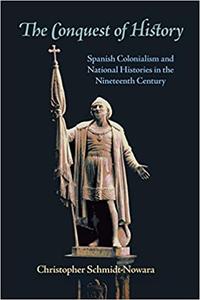 As Spain rebuilt its colonial regime in Cuba, Puerto Rico, and the Philippines after the Spanish American revolutions, it turned to history to justify continued dominance. The metropolitan vision of history, however, always met with opposition in the colonies.
The Conquest of History examines how historians, officials, and civic groups in Spain and its colonies forged national histories out of the ruins and relics of the imperial past. By exploring controversies over the veracity of the Black Legend, the location of Christopher Columbus’s mortal remains, and the survival of indigenous cultures, Christopher Schmidt-Nowara’s richly documented study shows how history became implicated in the struggles over empire. It also considers how these approaches to the past, whether intended to defend or to criticize colonial rule, called into being new postcolonial histories of empire and of nations.