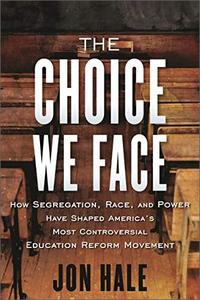 A comprehensive history of school choice in the US, from its birth in the 1950s as the most effective weapon to oppose integration to its lasting impact in reshaping the public education system today.

Most Americans today see school choice as their inalienable right. In The Choice We Face, scholar Jon Hale reveals what most fail to see: school choice is grounded in a complex history of race, exclusion, and inequality. Through evaluating historic and contemporary education policies, Hale demonstrates how reframing the way we see school choice represents an opportunity to evolve from complicity to action.

The idea of school choice, which emerged in the 1950s during the civil rights movement, was disguised by American rhetoric as a symbol of freedom and individualism. Shaped by the ideas of conservative economist Milton Friedman, the school choice movement was a weapon used to oppose integration and maintain racist and classist inequalities. Still supported by Democrats and Republicans alike, this policy continues to shape American education in nuanced ways, Hale shows—from the expansion of for-profit charter schools and civil rights–based reform efforts to the appointment of Betsy DeVos.

Exposing the origins of a movement that continues to privilege middle- to upper-class whites while depleting the resources for students left behind, The Choice We Face is a bold, definitive new history that promises to challenge long-held assumptions on education and redefines our moment as an opportunity to save it—a choice we will not have for much longer.