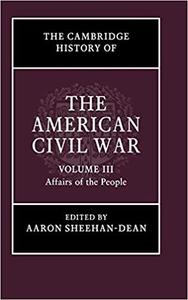 This volume analyzes the cultural and intellectual impact of the war, considering how it reshaped Americans’ spiritual, cultural, and intellectual habits. The Civil War engendered an existential crisis more profound even than the changes of the previous decades. Its duration, scale, and intensity drove Americans to question how they understood themselves as people. The chapters in the third volume distinguish the varied impacts of the conflict in different places on people’s sense of themselves. Focusing on particular groups within the war, including soldiers, families, refugees, enslaved people, and black soldiers, the chapters cover a broad range of ways that participants made sense of the conflict as well as how the war changed their attitudes about gender, religion, ethnicity, and race. The volume concludes with a series of essays evaluating the ways Americans have memorialized and remembered the Civil War in art, literature, film, and public life.