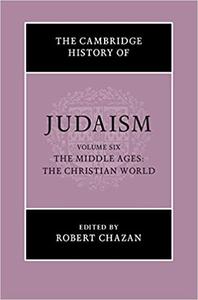 Volume 6 examines the history of Judaism during the second half of the Middle Ages. Through the first half of the Middle Ages, the Jewish communities of western Christendom lagged well behind those of eastern Christendom and the even more impressive Jewries of the Islamic world. As Western Christendom began its remarkable surge forward in the eleventh century, this progress had an impact on the Jewish minority as well. The older Jewries of southern Europe grew and became more productive in every sense. Even more strikingly, a new set of Jewries were created across northern Europe, when this undeveloped area was strengthened demographically, economically, militarily, and culturally. From the smallest and weakest of the world’s Jewish centers in the year 1000, the Jewish communities of western Christendom emerged – despite considerable obstacles – as the world’s dominant Jewish center by the end of the Middle Ages. This demographic, economic, cultural, and spiritual dominance was maintained down into modernity.