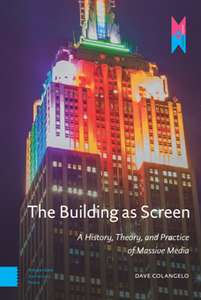 The Building as Screen: A History, Theory, and Practice of Massive Media describes, historicizes, theorizes, and creatively deploys massive media – a set of techno-social assemblages and practices that include large outdoor projections, programmable architectural facades, and urban screens – in order to better understand their critical and creative potential. Massive media is named as such not only because of the size and subsequent visibility of this phenomenon but also for its characteristic networks and interactive screen and cinema-like qualities. Examples include the programmable lighting of the Empire State Building and the interactive projections of Montreal’s Quartier des spectacles, as well as a number of works created by the author himself. This book argues that massive media enables and necessitates the development of new practices of expanded cinema, public data visualization, and installation art and curation that blend the logics of urban space, monumentality, and the public sphere with the aesthetics and affordances of digital information and the moving image.