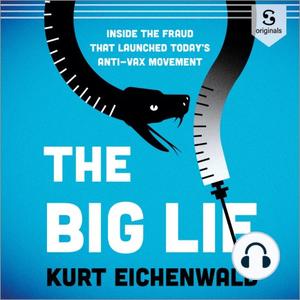 Set against the backdrop of a global pandemic and growing conspiracies aimed at so-called fake news and false science, The Big Lie takes an unsparing, inside look at the fraudulent doctor whose lies gave birth to the dangerous—and escalating—war on vaccines. A timely, cautionary tale of how deceit and misinformation can lead to distrust, public panic, and even death.

“It’s abundantly clear why [Kurt Eichenwald] is considered one of the best investigative reporters in the business.” –BusinessWeek

As the world anxiously tracks the rollout of the COVID vaccine, a large and influential group of nay-sayers continues its mission to cast doubt and stir fear. These are the anti-vaxxers, those who believe that vaccines are not only ineffective but dangerous. Distrust of vaccines is as old as vaccination itself, but in recent years, it has become an alarming trend that has affected public health. Measles and whooping cough infections have skyrocketed across the globe, endangering children and those at high risk. Refusal of a COVID vaccine only raises the stakes.

Much of today’s anti-vax fervor can be directly traced to one person: Andrew Wakefield, an English gastroenterologist who, in the 1990s, made the false assertion that vaccines cause autism. With nothing but his own scant and highly flawed research as proof, he launched a public campaign against the MMR (measles, mumps, rubella) vaccine, claiming that it caused intestinal inflammation that in turn caused autism. He created false hope in desperate parents, who agreed to submit their children to his invasive, painful, and unethical medical tests. He misled and outright lied to colleagues and employers, who thought they had no reason to distrust one of their own. In the end, he set off a panic that spread from England to the United States and fueled anti-vaccine conspiracy theories that have only grown in the new era of science denial and right-wing outrage.

In The Big Lie investigative journalist Kurt Eichenwald, a two-time Pulitzer Prize finalist and author of the explosive New York Times bestsellers The Informant and Conspiracy of Fools, tells the little-known story of Wakefield’s years-long deception and the devastating public-health consequences that resulted. More importantly, Eichenwald reveals that Wakefield continues to do damage. Though stripped of his medical license in England, he has found success and notoriety in the United States. Now living in Florida with his supermodel girlfriend, Elle Macpherson, he has seized on COVID-19 to advance his false claims. Enabled by a community that chooses to believe unfounded theories over hard science, Wakefield has become something of a medical Donald Trump. The effect his lies might have on international efforts to vaccinate against a disease that has killed 2.5 million and counting is, chillingly, still unknown.