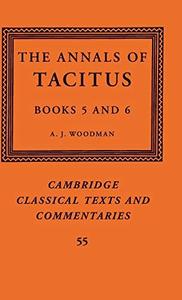 Books 5 and 6 of Tacitus’ Annals cover the last years of the emperor Tiberius. Although most of Book 5 is lost, Book 6 survives complete and offers a vivid narrative of the increasingly tyrannical princeps, secluded on the island of Capri; the book ends with his death and obituary notice, one of the most celebrated passages of classical literature. The volume presents a new text of Books 5 and 6, restoring the division between them which was proposed by Lipsius, as well as a full commentary on the text, covering textual, literary, linguistic and historical matters. An Appendix discusses ‘The Tacitean Tiberius’. The volume rounds off the sequence which began with commentary on Books 1 and 2 of Tacitus’ Annals by F. R. D. Goodyear (1972, 1981) and was continued by commentary on Book 3 by A. J. Woodman and R. H. Martin (1996).