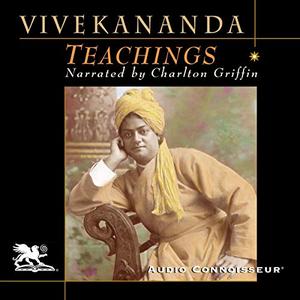 It is an undoubted fact that the message of Vivekananda has influenced, inspired, and transformed thousands of lives. Here in this recording are given some quotations from the great spiritual leader for the benefit of those who do not have time to go through his voluminous writings and speeches, so that they may get at least a partial glimpse of the strength and sublimity of his teachings. These quotations may be helpful even to those who have studied his works, because sometimes one or two words of this great dynamic personality are sufficient to invigorate a drooping spirit, or to awaken one to a new sense of hope and courage when everything seems dark and circumstances appear insurmountable.

Vivekananda was born Narendranath Datta in Calcutta on January 12, 1863. He was interested in spirituality from a young age. William Hastie (principal of Christian College, Calcutta, from where Narendra graduated) wrote, “”Narendra is really a genius. I have travelled far and wide but I have never come across a lad of his talents and possibilities, even in German universities, among philosophical students. He is bound to make his mark in life.” In 1881, Narendra first met Ramakrishna, who became his spiritual master. Everything changed after that. Vivekananda would go on to become one of the most profound, influential spiritual philosophers of all time. He passed away on July 4, 1902.

Listeners should be aware that Vivekananda spoke to a wide variety of students and followers, whose religions, cultures, and national origins differed widely. His remarks are calibrated for those hearers, both in India and abroad.

This production includes a one-hour introduction by Christopher Isherwood.