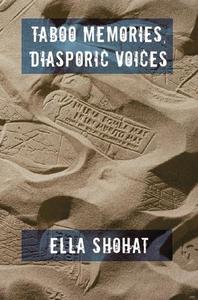 Taboo Memories, Diasporic Voicesbrings together for the first time a selection of trailblazing essays by Ella Shohat, an internationally renowned theorist of postcolonial and cultural studies of Iraqi-Jewish background. Written over the past two decades, these twelve essays—some classic, some less known, some new—trace a powerful intellectual trajectory as Shohat rigorously teases out the consequences of a deep critique of Eurocentric epistemology, whether to rethink feminism through race, nationalism through ethnicity, or colonialism through sexuality.Shohat’s critical method boldly transcends disciplinary and geographical boundaries. She explores such issues as the relations between ethnic studies and area studies, the paradoxical repercussions for audio-visual media of the “graven images” taboo, the allegorization of race through the refiguring of Cleopatra, the allure of imperial popular culture, and the gender politics of medical technologies. She also examines the resistant poetics of exile and displacement; the staging of historical memory through the commemorations of the two 1492s, the anomalies of the “national” in Zionist discourse, the implications of the hyphen in the concept “Arab-Jew,” and the translation of the debates on orientalism and postcolonialism across geographies.Taboo Memories, Diasporic Voicesnot only illuminates many of the concerns that have animated the study of cultural politics over the past two decades; it also points toward new scholarly possibilities.