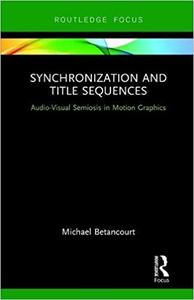 Synchronization and Title Sequences proposes a semiotic analysis of the synchronization of image and sound in motion pictures using title sequences. It is the second volume in Michael Betancourt’s study of semiotics and cinema using the title sequence as a critical focus, allowing for a consideration of fundamental theoretical issues apart from both the issues of narrative and realism common to commercial media. Through detailed historical close readings of title designs that use either voice-over, an instrumental opening, or title song to organize their visuals–from Vertigo (1958) to The Player (1990) and X-Men: First Class (2011)–author Michael Betancourt develops a foundational framework for the critique and discussion of motion graphics’ use of synchronization and sound, as well as a theoretical description of how sound-image relationships develop on-screen. The resulting study of synchronization is both a critical analysis and a theory of visual music in cinema.