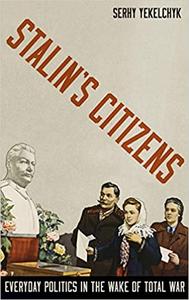 Being a good citizen under Stalin meant taking an active part in political rituals, such as elections, parades, festive meetings, political information sessions, and subscriptions to state bonds. In Stalin’s Citizens, Serhy Yekelchyk examines how ordinary citizens came to embrace some parts of this everyday Stalinist politics and resist others.

The first study of the everyday political life under Stalin, this book examines citizenship through common practices of expressing Soviet identity in the public space. The Stalinist state understood citizenship as practice, with participation in a set of political rituals and public display of certain “civic emotions” serving as the marker of a person’s inclusion in the political world. The state’s relations with its citizens were structured by rituals of celebration, thanking, and hatred-rites that required both political awareness and a demonstrable emotional response. Soviet functionaries transmitted this obligation to ordinary citizens through the mechanisms of communal authority, including workplace committees, volunteer agitators, and other forms of peer pressure, as much as through brutal state coercion. Yet, the populace also often imbued these ceremonies with different meanings: as a popular fête, an occasion to get together after work, a chance to purchase goods not available on other days, and an opportunity to indulge in some drinking. The people also understood these political rituals as moments of negotiation whereby they would fulfill their “patriotic duty” but expected the state to reciprocate by providing essential services and basic social welfare. Nearly-universal passive resistance to required attendance challenges theories about the mass internalization of communist ideology.

Focusing on the last years of World War II and immediate postwar years, Yekelchyk shows how formulaic rituals under Stalin could create space for the people to express their concerns, fears, and prejudices, as well as their eagerness to be viewed as citizens in good standing.