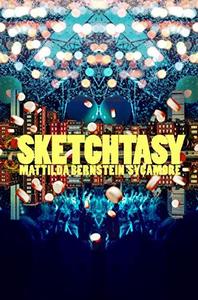 Sketchtasytakes place in that late-night moment when everything comes together, and everything falls apart–it’s an urgent, glittering, devastating novel about the perils of queer world-making in the mid-’90s.This is Boston in 1995, a city defined by a rabid fear of difference. Alexa, an incisive twenty-one-year-old queen, faces everyday brutality with determined nonchalance. Rejecting middle-class pretensions, she negotiates past and present traumas with a scathing critique of the world. Drawn to the ecstasy of drugged-out escapades, Alexa searches for nourishment in a gay culture bonded by clubs and conformity, willful apathy, and the specter of AIDS. Is there any hope for communal care?Sketchtasybrings 1990s gay culture startlingly back to life, as Alexa and her friends grapple with the impact of growing up at a time when desire and death are intertwined. With an intoxicating voice and unruly cadence, this is a shattering, incandescent novel that conjures the pain and pageantry of struggling to imagine a future.“Immersed in the ’90s queer culture of Boston, Alexa is a mess. She’s a queen in crisis, desperate for relief from the sinister traumas of her past and the ominous threats of her present. She’s searching for hope, even as she becomes mired in an unforgiving cycle of addiction.Sketchtasyis a breakneck spree through a cultural moment, scratching off the patina of nostalgia to show how urgently relevant it still is. If you’ve heard her read, you know Sycamore’s voice is one in a zillion. She’s at her very best here.” —Dave Wheeler, associate editor,Shelf Awareness”Reading this was like a night of stealing other people’s drinks, or a much-needed slap to the face, or a little of both. Bold, glittering, wise, fun, the novel as found poem alive in the mouth of this truth-telling queen, making her way through a wasteland of other people’s lies (and a few of her own), and looking for something near paradise. Follow her and live.” —Alexander Chee, author ofThe Queen of the Night“IfSketchtasydoesn’t become a classic, we are doomed. Mattilda has such complete command of craft here that she is able to evoke experience, rather than simply describe it. Whether or not we identify with her characters, she lets us into their hearts and perceptions through sheer talent, raw honesty, and the sophisticated ability to handle word order, duration, pacing, and soul. The form of this novel is determined organically from the emotions at their core. A lesson in how to write, how to remember, how to grapple with history.” —Sarah Schulman”Sketchtasyis a vivid masterpiece that rivals the likes ofLast Exit to Brooklynby Hubert Selby Jr. It’s dangerous, hilarious, scary and transcendentally beautiful. Sycamore’s prose is so searing, you might want to read it with sunglasses.” —Jake Shears, musician, actor, and author ofBoys Keep Swinging“Every sentence inSketchtasyis a living thing, fierce and funny and a little bit dangerous—a voice made of coke dust and club lights, cut with crackling insight. I was completely addicted to the story of Alexa’s search for connection, set in the gritty Boston nightclub scene in the ‘90s. Nobody writes like Mattilda Bernstein Sycamore—most writers wouldn’t dare try.” —Julie Buntin, author ofMarlena