The Siemens Digital Industries Software development team is pleased to announce the availability of Simcenter Femap 2021.2.1 (MP1). This release provides a new features and corrections that will help stability and productivity across the simulation workflow.

FEMAP 2021.2.1 (MP1) Corrections
Geometry
– Corrected issue which caused individual solids to not be Boolean added together one at a time if the Geometry, Solid, Add command failed when attempting to Boolean add more than two solids together.
Graphics
– Corrected issue where beam elements with a trapezoidal tube cross sections were not being drawn in the correct place. This made the stress locations appear slightly incorrect, but they were actually correct and it was the cross section being drawn in the incorrect location.
– Corrected issue where Nastran General Matrix elements were not correctly included in calculation of the model box when using certain commands on the View, Autoscale menu.
– Corrected issue where nodes which had been hidden by Draw/Erase toolbar and/or the Visibility check boxes in the Model Info Tree and Visibility dialog box could still be selected when the New Picking option was on in File, Preferences.
Performance Graphics
– Corrected issue where Box, Circle, Polygon, and Freehand picking did not select nodes if the Nodes On check box was enabled on the Element/Material/Property tabs of Visibility dialog box.
User Interface – General
– Corrected issue which caused Femap to become unresponsive if solution frequencies were selected in subcases via the response frequency list and the File, Rebuild command was later used on the model (PR# 10109314).
Interfaces – Nastran
– Corrected issue that could cause Femap to become unresponsive when writing Nastran BLSEG edge contact or slide line elements where the edge nodes are connected to unsupported element topologies, such as Rigid elements.
Interfaces – Simcenter Nastran
– Corrected issue which prevented contact parameters other than PENN, PENT, and PENTYPE from being written to the BCTPARM bulk data entry when a connection property was specified for the Gaps as Contact option in the NASTRAN Bulk Data Options dialog box in the Analysis Set Manager.
– Corrected issue which caused the “MPC” case control command to not be written for SOL401/SOL402 when the Constraint Equations drop-down in the Boundary Conditions dialog box is set to “0..From Constraint Set” (PR# 10082779).
Interfaces – ANSYS
– Corrected issue reading and writing parabolic elements which did not have all midside nodes defined (i.e., only certain midside nodes were defined on an element).
– Corrected issue reading Ansys UNBL descriptor from some commands.
Properties
– Corrected issue which forced the top dimension of Wide Flange (I-beam), trapezoidal, and trapezoidal tube cross-sections used for Beam Properties to be smaller than the bottom dimension (PR# 10081554).
Meshing
– Corrected issue which caused Femap to become unresponsive when attempting to set a mesh size of a surface which referenced corrupt geometry. While the mesh sizing may not come out as expected, Femap will continue to run and cleanup of the corrupt geometry can be attempted.
Output and Post-Processing
– Corrected issue that could cause the Model, Output, Transform command to fail when transforming output in the newly created output vectors. This would only occur in some rare cases when global ply IDs were used. In all cases, the laminate Failure Indices output was improperly stored to invalid output vector IDs which would cause the failure (PR# 10050427).
Groups and Layers
– Corrected issue where New Picking is allowing curves and surfaces to be picked when they are only being displayed as part of solids which currently reside in a group, by removing code that was incorrectly implemented to make curves and surfaces on solids in groups follow the solid visibility switch (PR# 10025208).
JT Files
– Corrected issue where loads or boundary conditions that point directly into or out of the screen (i.e., directly towards or away from the user) are not being drawn correctly in JT file output.
API
– Corrected an issue that was introduced in v2021.1 that prevented batch file (*.bat) from being run from the User Tools menu on the Custom and User Tools Toolbar (PR# 10107155). 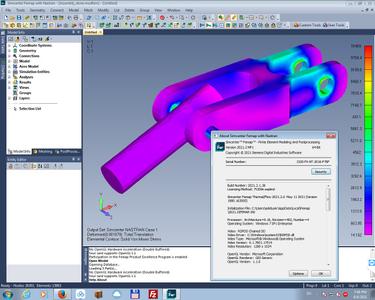 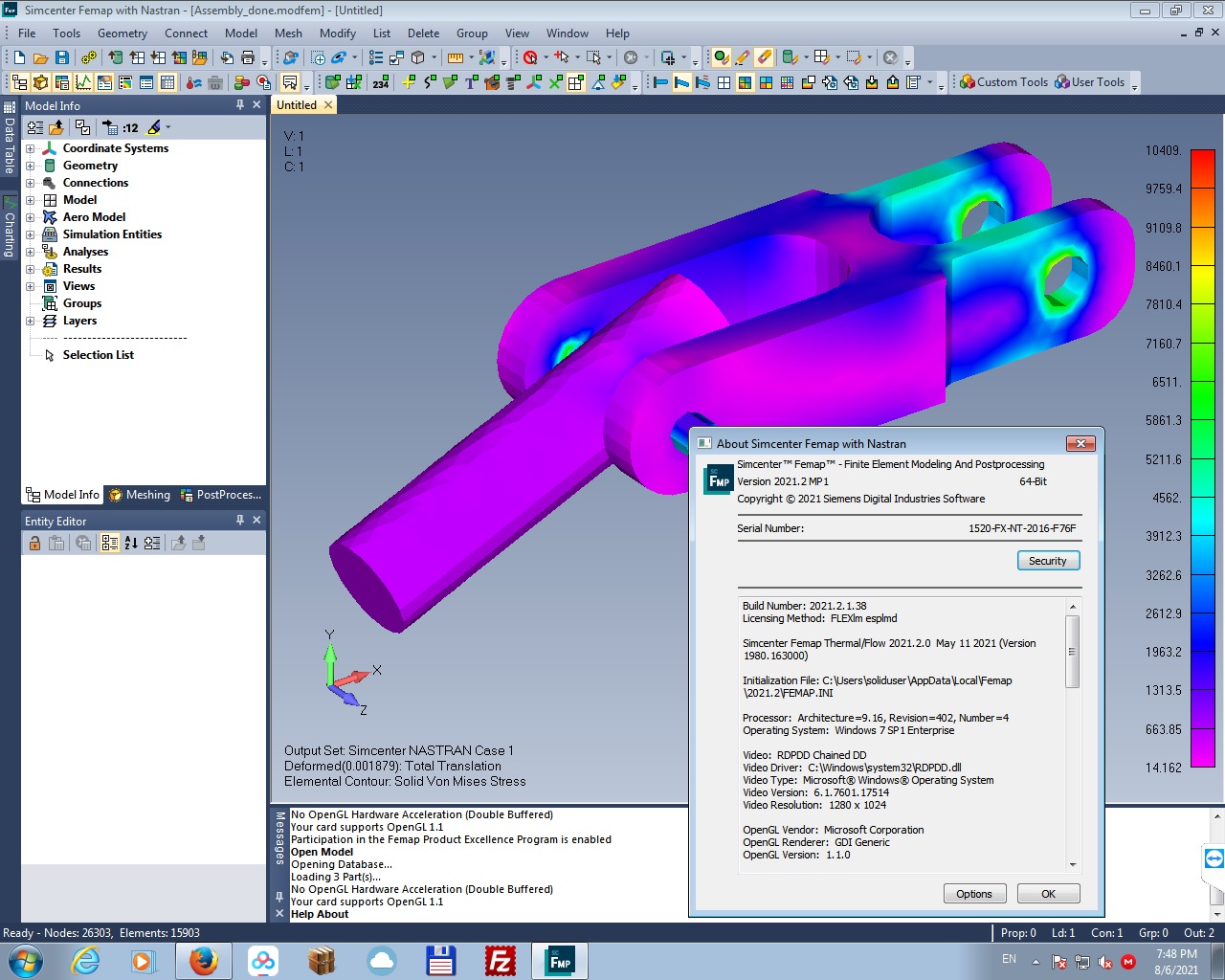 Simcenter Femap software is a standalone finite element modeling (FEM) pre- and postprocessor for engineering simulation and analysis. The software is computer-aided design (CAD) independent and can import geometry from all major CAD platforms. It supports most CAD data formats. Simcenter Femap also works in combination with a wide variety of FEA solvers, including Simcenter Nastran software.

Simcenter Femap is recognized as the world’s leading CAD-independent Windows-native pre- and post- processor for advanced engineering finite element analysis. The latest release provides a variety of enhancements that will improve your productivity across the simulation workflow.

Siemens PLM Software. a business unit of the Siemens Digital Factory Division, is a leading global provider of software solutions to drive the digital transformation of industry, creating new opportunities for manufacturers to realize innovation. With headquarters in Plano, Texas, and over 140,000 customers worldwide, Siemens PLM Software works with companies of all sizes to transform the way ideas come to life, the way products are realized, and the way products and assets in operation are used and understood.

* System Requirements:
Welcome to FEMAP! This document will help you to setup your computer so that you can immediately begin to explore the many capabilities of FEMAP.

This document contains information specific to getting started on a PC, which includes 64-bit versions for Windows 7, Win-dows 8, Windows 8.1, and Windows 10.

The FEMAP installer contains only the 64-bit version of FEMAP, as a 32-bit version is no longer available.

Hardware/Software Requirements
There are no special hardware/software requirements for FEMAP beyond those imposed by the Windows operating systems. There are many types of hardware that will allow you to use FEMAP. Proper choice of hardware, however, can often make the difference between frustration and productivity. Here are a few suggestions:
– Memory, RAM
– Memory, (Hard Disk)
– Graphics Boards
-Abaqus ODB Requirements

Memory, RAM
You will need at least 128 Mbytes of RAM to run FEMAP and the Parasolid solid modeling engine, which is the default. Obviously, the more amount of RAM the better. Adding RAM can be one of the most cost effective means of increasing per-formance.If using the “Standard” geometry Engine in FEMAP, you can actually run with as little as 32 Mbytes of RAM. This is not a recommended configuration.

Memory, (Hard Disk)
Required hard disk space is very difficult to estimate, but in general you will never have enough. Analysis results will be the main driver of any disk space requirement. Models are typically relatively small. A model with 1000 nodes and 1000 ele-ments would typically be less than 1 Mbyte in size. Output from an analysis of that model, however, could be 5 Mbytes, 10 Mbytes or even larger, depending on the output you request. To estimate total disk space, you need to first estimate how many models you will have on-line simultaneously, the approximate size of those models, and the type of output you will request. It is recommend to have as much disk space as budget will allow, as each version of FEMAP can support larger and larger models, which in turn create larger and larger amounts of output.

Graphics Boards
While, standard graphics adapters may work very well with FEMAP, having a specialized board with support for OpenGL will provide increased graphical performance when dynamically rotating large, complex models. They also usually provide higher resolution and more colors, which make graphics easier to see and more realistic. Also, in order to use the “Perfor-mance Graphics” option, a graphics card which supports OpenGL 4.2 is required.