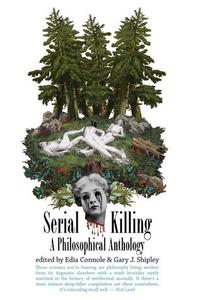 “What Bataille once termed the ‘horror of philosophy,’ to refer to the dread felt by philosophers when making abstract claims of thought, has been taken-up by Eugene Thacker to refer more specifically to a fundamental unknowing embedded in the fabric of existence, suggesting the impossibility of our ever comprehending it. For Thacker, as for Bataille, this inherent dread moves the question of existence beyond the grasp of philosophy into the realm of religious and mystical ecstasy where, once sloughed off, along with human-centric concerns regarding morality – ‘psychology, desire, motive, free will, and so on’ – horror becomes, in this ‘radically singular self/world-negation,’ what Nicola Masciandaro, after Meher Baba and Rumi above, would term ‘individualized salvation or God realization.’

The oeuvre of each of these thinkers, in its own disparate way, serves to suggest that the holy exists at the site of the most profane. Uniting their thought is a religious intuition that extends back to pre-modernity, to mystical anatheistic texts that see a sacred excess emerging from the play of opposites. On the other hand, the bodily signature of this excess has become for some nothing more than the stigma of the profane everyday openness of everybody in modernity’s ‘wound culture’: ‘the public fascination with torn and open bodies, with torn and open persons’ arising from the intersection of private desire and public fantasy in a society based on the spectacle of atrocity. (Seltzer)

Central to the movement of the wound expressed, from sacred signature to serial kitsch, is the emergence in modernity of a ‘new’ ontological type and continuum, serial killing. Bound up with popular notions of the body-machine-image complex endemic to our digital culture, with its unremitting flow of codes, numbers and letters, the serial killer is said to represent a fundamental break with pre-modern thought and culture; specifically, with the scholastic notion of haeccitas, that which accounts for the individuality of an individual or the individuation of different members of a species. And yet, the most popular refrain in this regard pertaining to the devoid, anonymous, impersonal nature and character of the killer – ‘living composites,’ ‘minus men,’ whose methods of ‘material transportation (bodies) and message transportation’ bottom out in a flat ontology or desire for total unity, of direct fusion with nature or with an indistinct mass of others: ‘a mixing of flesh in a common flame and single unity of ashes … a uniform anonymous corporation cemetery’ [Nilsen]) – mirrors the self/world-negation sought by the pre-modern mystical tradition, what Bataille would term the indifferent world of ‘continuity,’ or ‘divinity.’ Understood thus, the dead-leveling, depersonalization and ambivalent dread that characterizes serial killing unshackles its art from well-worn media tropes, and maps the incomprehensibility of its methods onto questions of ontology, ecology and economy through corporeality, connecting individual dynamics of hope, fear and horror to larger scale environmental, planetary and cosmic dynamics of the same order.

In sum, while a great deal has been written on the subject of serial killers, very little has been written alongside them, approaching them as they approach us: without recourse to any of the usual courtesies or mercies, taking what they want, leaving behind new signatures in what remains. The point here, then, is not to construct further taxonomies, or to pin these killers down like so many zoological specimens, but to put their logos and their methods to use, to open them up not merely to observe their workings, but in order that we might fearlessly climb inside.” – https://schismmsihcs.wordpress.com/2014/10/15/serial-killing-a-philosophical-anthology-forthcoming-2015/

“Those screams you’re hearing are philosophy being awoken from its dogmatic slumbers with a stark brutality rarely matched in the history of intellectual anomaly. If there’s a more intense sleep-killer compilation out there somewhere, it’s concealing itself well.” – Nick Land, author of Templexity: Disordered Loops through Shanghai Time (Urbanatomy, 2014)

“Serial Killing leaves behind the analysis of the serial killer as a romantic anti-hero, diagnostic category of psychopathology or sociological symptom to offer a collection of essays that infuses the conventional delusions of critical distance with the passionate, homicidal embrace of loving neighborliness. The theoretical, photographic and fictional essays in this volume take the serial killer as an object of both philosophical speculation and spiritual contemplation. In a brilliant cornucopia of styles and obsessions, serial killing becomes, among many other things: the touchstone of common in-humanity, a form of sacrifice and mystical rite, a leisure activity, a kind of bloody ikebana, a kaligraphic and auto-graphic mode of self-portraiture and flesh inscription, the meta-relational emanation of immanent suffering, a form of kleptomancy, an expression of neoliberal love, an ascetic practice of cosmic joy. It is properly mad.” – Scott Wilson, Kingston University, author of Stop Making Sense (Karnac, 2015)

“One of the deepest and darkest truths in psychoanalysis is about the serial nature of the object. We pretend that it is unique, irreplaceable, singular, but it isn’t, and it always exists as part of a multiple whose secret truth, to our real horror, is the emptiness or nothing at the center of this excess. In this fascinating collection of essays edited by Edia Connole and Gary Shipley we find out about this serial perversion of everyday life.” – Jamieson Webster, Eugene Lang College, author of Stay! Illusion (Vintage, 2014)

“We simultaneously love and hate serial killers: we dread them, and yet we are fascinated by them. Both in reality, and in books and television shows, serial killers seem to stand at the very edge of what is possible, or of what is human. The essays in this volume push to the extremes of philosophy, and of art and literature, in order to speak to our uneasy relationship with what we both desire and abhor.” – Steven Shaviro, Wayne State University, author of The Universe of Things (UMP, 2014)