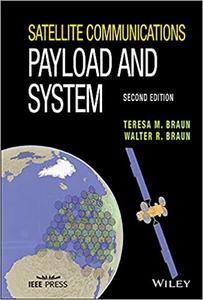 This book presents the state of the art in commercial communications satellite systems, thoroughly and in detail not to be found in any other book. These systems provide the television and some of the telephone and Internet services in use every day. The book focuses on the satellite payload, which consists of antennas, receivers, and transmitters. The book discusses the what, the how, and the why of various choices that have been made in currently operating systems.

The book is organized into three parts:

In-depth description of various payload units, not requiring specialist knowledge. For each unit and the payload as a whole, the architectures, the theory of operation, analysis, performance, and specifications are presented.
End-to-end system context in which the payload operates. Digital communications theory and satellite communications protocols are introduced. The time-varying properties of satellite-to-ground links are explored. Tips on system simulation are given.
Current commercial end-to-end satellite communications systems, in their grand variety. Emphasis is placed on the satellite payload and its interactions with the satellite bus, ground stations, and user terminals.

The second edition adds the third part of the book. Payload unit descriptions have been updated and enlarged. The communications theory chapter has been upgraded and the protocols chapter added to briefly describe all the elements mentioned in part 3. Non-geostationary satellite considerations have been included throughout the book.

If you are a payload systems engineer, this book can serve as a valuable tool for expanding your knowledge base. If you’re a graduate student, it will guide your introductory learning. As an industry professional, you can make this book a go-to reference.