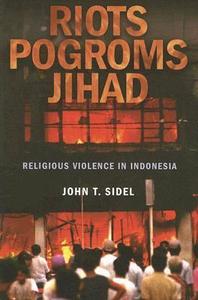 In October 2002 a bomb blast in a Balinese nightclub killed more than two hundred people, many of them young Australian tourists. This event and subsequent attacks on foreign targets in Bali and Jakarta in 2003, 2004, and 2005 brought Indonesia into the global media spotlight as a site of Islamist terrorist violence. Yet the complexities of political and religious struggles in Indonesia, the most populous Muslim country in the world, remain little known and poorly understood in the West.InRiots, Pogroms, Jihad, John T. Sidel situates these terrorist bombings and other “jihadist” activities in Indonesia against the backdrop of earlier episodes of religious violence in the country, including religious riots in provincial towns and cities in 1995-1997, the May 1998 riots in Jakarta, and interreligious pogroms in 1999-2001. Sidel’s close account of these episodes of religious violence in Indonesia draws on a wide range of documentary, ethnographic, and journalistic materials. Sidel chronicles these episodes of violence and explains the overall pattern of change in religious violence over a ten-year period in terms of the broader discursive, political, and sociological contexts in which they unfolded.Successive shifts in the incidence of violence-its forms, locations, targets, perpetrators, mobilizational processes, and outcomes-correspond, Sidel suggests, to related shifts in the very structures of religious authority and identity in Indonesia during this period. He interprets the most recent “jihadist” violence as a reflection of the post-1998 decline of Islam as a banner for unifying and mobilizing Muslims in Indonesian politics and society. Sidel concludes this book by reflecting on the broader implications of the pattern observed in Indonesia both for understanding Islamic terrorism in particular and for analyzing religious violence in all its varieties.