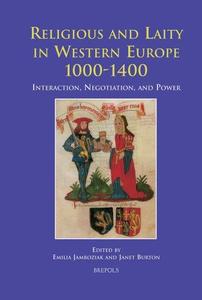 This volume examines forms of interaction between monastic or mendicant communities and lay people in the high Middle Ages in Britain, France, the Low Countries, and Scandinavia. The nineteen papers explore these issues in geographically and chronologically diverse settings in a way that no English-language collection has yet attempted. It brings together the latest research from established as well as younger historians. The first section ‘Patrons and Benefactors: power, fashion, and mutual expectations’ examines lay involvement in foundations, the rights held by patrons, and how they used these powers, as well as networks of relationships within broader groups of benefactors. The authors demonstrate how changing fashions shaped the fortunes of particular orders and houses and explore how power relations between different types of patrons and benefactors – royal figures, kinship, and other social groupings – affected the mutual expectations of the various parties. The second section of the volume, entitled ‘Lay and Religious: negotiation, influence, and utility’, shows how lay people’s ideas of the role of religious houses could impact upon their patronage of, and support for, monastic or mendicant institutions. Conversely, religious communities offered multi-faceted benefits – practical, intellectual, or spiritual – for the secular world. The book concludes by focusing on the rapid growth of confraternities, their relation to their urban mendicant and monastic contexts, and how the role and forms of confraternities evolved in the late medieval period.