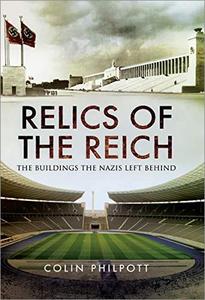 Relics of the Reich is the story of what happened to the buildings the Nazis left behind. Hitler’s Reich may have been defeated in 1945 but many buildings, military installations and other sites remained. At the end of the War, some were obliterated by the victorious Allies but others survived.

For almost fifty years, these were left crumbling and ignored with post-war and divided Germany unsure what to do with them, often fearful that they might become shrines for neo-Nazis. Since the early 1990s, Germans have come to terms with these iconic sites and their uncomfortable part. Some sites are even listed buildings.

Relics of the Reich visits many of the buildings and structures built or adapted by the Nazis and looks at what has happened since 1945 to try to discover what it tells us about Germany’s attitude to Nazism now.

It also acts as a commemoration of mankind’s deliverance from a dark decade and serves as renewal of our commitment to ensure history does not repeat itself.