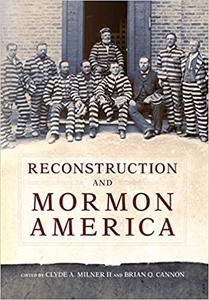 The South has been the standard focus of Reconstruction, but reconstruction following the Civil War was not a distinctly Southern experience. In the post–Civil War West, American Indians also experienced reconstruction through removal to reservations and assimilation to Christianity, and Latter-day Saints—Mormons—saw government actions to force the end of polygamy under threat of disestablishing the church. These efforts to bring nonconformist Mormons into the American mainstream figure in the more familiar scheme of the federal government’s reconstruction—aimed at rebellious white Southerners and uncontrolled American Indians. In this volume, more than a dozen contributors look anew at the scope of the reconstruction narrative and offer a unique perspective on the history of the Latter-day Saints.

Marshaled by editors Clyde A. Milner II and Brian Q. Cannon, these writers explore why the federal government wanted to reconstruct Latter-day Saints, when such efforts began, and how the initiatives compare with what happened with white Southerners and American Indians. Other contributions examine the effect of the government’s policies on Mormon identity and sense of history. Why, for example, do Latter-day Saints not have a Lost Cause? Do they share a resentment with American Indians over the loss of sovereignty? And were nineteenth-century Mormons considered to be on the “wrong” side of a religious line, but not a “race line”? The authors consider these and other vital questions and topics here. Together, and in dialogue with one another, their work suggests a new way of understanding the regional, racial, and religious dynamics of reconstruction—and, within this framework, a new way of thinking about the creation of a Mormon historical identity.