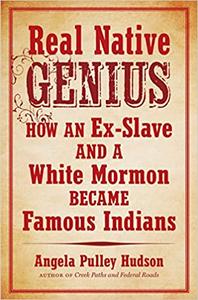 In the mid-1840s, Warner McCary, an ex-slave from Mississippi, claimed a new identity for himself, traveling around the nation as Choctaw performer “Okah Tubbee.” He soon married Lucy Stanton, a divorced white Mormon woman from New York, who likewise claimed to be an Indian and used the name “Laah Ceil.” Together, they embarked on an astounding, sometimes scandalous journey across the United States and Canada, performing as American Indians for sectarian worshippers, theater audiences, and patent medicine seekers. Along the way, they used widespread notions of “Indianness” to disguise their backgrounds, justify their marriage, and make a living. In doing so, they reflected and shaped popular ideas about what it meant to be an American Indian in the mid-nineteenth century.

Weaving together histories of slavery, Mormonism, popular culture, and American medicine, Angela Pulley Hudson offers a fascinating tale of ingenuity, imposture, and identity. While illuminating the complex relationship between race, religion, and gender in nineteenth-century North America, Hudson reveals how the idea of the “Indian” influenced many of the era’s social movements. Through the remarkable lives of Tubbee and Ceil, Hudson uncovers both the complex and fluid nature of antebellum identities and the place of “Indianness” at the very heart of American culture.