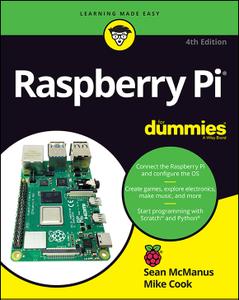 The Raspberry Pi makes it easy to learn about computers and computer programming, and Raspberry Pi For Dummies makes it even easier! Using this extremely affordable and compact computer, you can learn to code in languages like Scratch and Python, explore how electronics work, create computer-generated buildings in Minecraft and music in Sonic Pic, become Linux-savvy, make Internet-of-Things devices, or just play around! This book gets you up and running on your Raspberry Pi, starting with setting it up, downloading the operating system, and using the desktop environment. Then, the only limit is your imagination! It doesn’t matter whether you have a Raspberry Pi 4, Raspberry Pi 400, Raspberry Pi Zero W or an older model: we’ve got you covered.

Raspberry Pi For Dummies explores the latest technology—the Raspberry Pi 4 and 400, Scratch 3 programming language, new games bundled with the Raspberry Pi, and the hottest Add-Ons out there. This introductory guide is the perfect place to start if you want to get a taste of everything the Raspberry Pi can do!

• Set up your Raspberry Pi, install the operating system, and connect to the Internet
• Learn the basics of the Linux desktop and Linux shell so you can program, work, and play
• Use Python, Scratch, and Sonic Pi to write your first programs and make games and digital music
• Discover how circuits work hand-in-hand with your Pi

If you want to make the most of the Raspberry Pi for school, work, or play, you’ll love this easy-to-read reference.