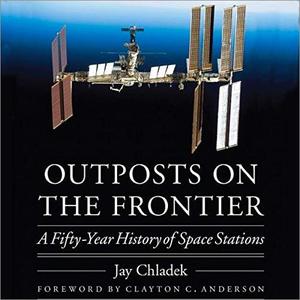 The International Space Station (ISS) is the largest man-made structure to orbit Earth and has been conducting research for close to a decade and a half. Yet it is only the latest in a long line of space stations and laboratories that have flown in orbit since the early 1970’s. The histories of these earlier programs have been all but forgotten as the public focused on other, higher-profile adventures such as the Apollo moon landings.

Outposts on the Frontier reveals how the Soviets and the Americans combined strengths to build space stations over the past 50 years. At the heart of these scientific advances are people of both greatness and modesty. Jay Chladek documents the historical tapestry of the people, the early attempts at space station programs, and how astronauts and engineers have contributed to and shaped the ISS in surprising ways.

Outposts on the Frontier delves into the intriguing stories behind the USAF Manned Orbiting Laboratory, the Almaz and Salyut programs, Skylab, the Apollo-Soyuz Test Project, Spacelab, Mir station, Spacehab, and the ISS and gives past-due attention to Vladimir Chelomei, the Russian designer whose influence in space station development is as significant as Sergei Korolev’s in rocketry. Outposts on the Frontier is an informative and dynamic history of humankind’s first outposts on the frontier of space.