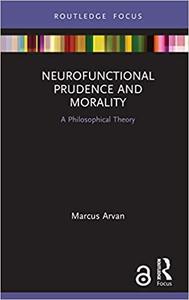 Philosophers across many traditions have long theorized about the relationship between prudence and morality. Few clear answers have emerged, however, in large part because of the inherently speculative nature of traditional philosophical methods. This book aims to forge a bold new path forward, outlining a theory of prudence and morality that unifies a wide variety of findings in neuroscience with philosophically sophisticated normative theorizing.
The author summarizes the emerging behavioral neuroscience of prudence and morality, showing how human moral and prudential cognition and motivation are known to involve over a dozen brain regions and capacities. He then outlines a detailed philosophical theory of prudence and morality based on neuroscience and lived human experience. The result demonstrates how this theory coheres with and explains the behavioral neuroscience, showing how each brain region and capacity interact to give rise to prudential and moral behavior.
Neurofunctional Prudence and Morality: A Philosophical Theory will be of interest to philosophers and psychologists working in moral psychology, neuroethics, and decision theory.
Chapter 3 of this book is freely available as a downloadable Open Access PDF under a Creative Commons Attribution-Non Commercial-No Derivatives 4.0 license.