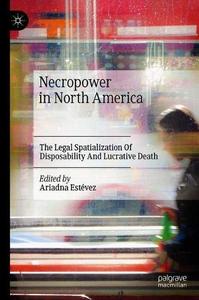 This book discusses and theorizes Achille Mbembe’s necropolitics, the politics of death, in the specific context of North America. It works to characterize and analyze the particularities and relational differences of American and Canadian necropowers vis-à-vis their devices, subjectivities, necroempowered subjects, and production of spaces of death in their geographical and symbolic borderlands with the Third World: the US-Mexico border, indigenous lands, migrant and Black-American ​neighborhoods, and resource rich geographies.
North American necropowers not only profit from death, but also conduct disposable populations to death throughout the region. The volume proposes a postcolonial perspective that characterizes the political power of North America as a necropower—or the sovereign power to make die. Each chapter therefore theorizes and analyzes the specificities of necropower, examining different necropolitics that range from asylum and migration restrictions to the economic exploitation and abandonment of deprived populations and policing of ethnic minorities, in particular Mexican immigrants, indigenous peoples, and African Am​erican communities.

​Ariadna Estévez is Professor at the Centre for Research on North America of the National Autonomous University of Mexico (UNAM). She teaches human rights, forced migration, and biopolitical and necropolitical research methodologies at UNAM’s Faculty of Political and Social Sciences; human rights critical perspectives at the Instituto de Estudios Críticos 17; and human rights from a feminist perspective at the Instituto Simone de Beauvoir. She is the author of Necropolitical Wars and Asylum Biopolitics in North America (2018) and Human Rights, Migration and Social Conflict: Towards a Decolonized Global Justice (2012).