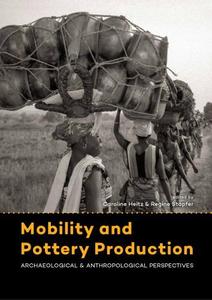 For many past and present societies, pottery forms an integral part of material culture and everyday practice. This makes it a promising case example to address human-thing-relations on a more general level, as well as social life itself. Humans organise their lives not only by engaging with materials and things but also by oscillating between movement and stasis. In these various rhythms of mobility – from daily subsistence-based movements to long-term migrations – things like ceramic vessels are crafted, but also act as consumer goods. From their production until their deposition as waste, grave-goods, collectibles etc. pottery vessels can move with their owners or be passed on and may thus shift between spatial, temporal, social, economic and cultural contexts.

This volume unites contributions addressing such phenomena from archaeological and anthropological perspectives. Evolved from an interdisciplinary workshop held at the Institute of Archaeological Sciences (University of Bern) in 2015, the aim is not to promote one single epistemic approach or any elaborated empirical findings but to trigger thoughts and foster discussions.

While the first part of the book contains introductory texts, the second part includes archaeological contributions that address mobility and social ties by focussing on variability in pottery production within, as well as between, settlements and regions. Taking a more object-centred perspective, they comprise attempts to think beyond established concepts of ‘archaeological cultures’ and chronological issues. The third part unites anthropological and archaeological texts that take more actor-centred perspectives of making, distributing and using pottery. These texts examine how humans and things are intertwined though practices and various rhythms of movement and mobility. Thereby it can be shown how cultural forms are reproduced but also transformed by humans and things, like pots, potters, pottery mongers and pottery users that are intermittently on the move.