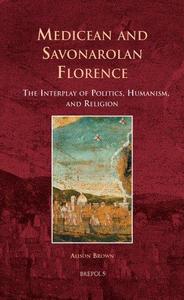 This volume examines Florentine society at crucial moments of change that are often treated separately in historical narratives: the later years of Medici government under the aegis of Lorenzo the Magnificent, the four tumultuous years of Savonarola’s religious regime from 1494 to 1498, and the unsettled early decades of the sixteenth century. Drawing upon original research conducted during the past decade, it provides important insights into the politics and conflicting ideologies in the city as experienced by different levels of society, not only by the politicians, preachers, and intellectuals whose voices are more familiar to us, but also by women and lower-class citizens. Since no single paradigm is adequate to describe these years of flux, this volume attempts to reassess the period by uncovering the debate underlying nearly all the topics it discusses. In this way, it offers a new and multifocused approach to the study of this important and influential period in Florentine history.