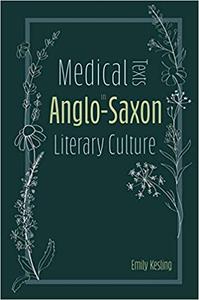 Four complete medical collections survive from Anglo-Saxon England. These were first edited by Oswald Cockayne in the nineteenth century and came to be known by the names Bald’s Leechbook, Leechbook III, the Lacnunga, and the Old English Pharmacopeia. Together these works represent the earliest complete collections of medical material in a western vernacular language.
This book examines these texts as products of a learnedliterary culture. While earlier scholarship tended to emphasise the relationship of these works to folk belief or popular culture, this study suggests that all four extant collections were probably produced in major ecclesiasticalcentres. It examines the collections individually, emphasising their differences of content and purpose, while arguing that each consistently displays connections with an elite intellectual culture. The final chapter considers the fundamentally positive depiction of doctors and medicine found within literary and ecclesiastical works from the period and suggests that the high esteem for medicine in literate circles may have favoured the study and translation of medical texts.

Introduction
Bald’s Leechbook: A Medical Compendium
Elves, the Demonic, and Leechbook III
The Lacnunga and Insular Grammatica
The Old English Herbarium and the Monastic Reform
Medicine in Anglo-Saxon England
Appendix A: Bald’s Leechbook and its Latin Source Material
Appendix B: B.Parallel Passages in the Lacnunga and MS CCCC 41
Bibliography