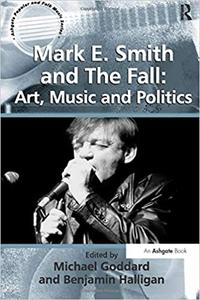 This volume offers a comprehensive range of approaches to the work of Mark E. Smith and his band The Fall in relation to music, art and politics. Mark E. Smith remains one of the most divisive and idiosyncratic figures in popular music after a recording career with The Fall that spans thirty years. Although The Fall were originally associated with the contemporaneous punk explosion, from the beginning they pursued a highly original vision of what was possible in the sphere of popular music. While other punk bands burned out after a few years, only to then reform decades later as their own cover bands, The Fall continue to evolve while retaining a remarkable consistency, even with the frequent line-up changes that soon left Mark E. Smith as the only permanent member of the group. The key aspect of the group that this volume explores is the invariably creative, unfailingly critical and often antagonistic relations that characterize both the internal dynamics of the group and the group’s position in the pop cultural surroundings. The Fall’s ambiguous position in the unfolding histories of British popular music and therefore in the new heritage industries of popular culture in the UK, from post-punk to anti-Thatcher politics, to the ‘Factory fiction of Manchester’ and on into Mark E. Smith’s current role as ageing enfant terrible of rock, illustrates the uneasy relationship between the band, their critical commentators and the historians of popular music. This volume engages directly with this critical ambiguity. With a diverse range of approaches to The Fall, this volume opens up new possibilities for writing about contemporary music beyond traditional approaches grounded in the sociology of music, Cultural Studies and music journalism – an aim which is reflected in the variety of provocative critical approaches and writing styles that make up the volume.