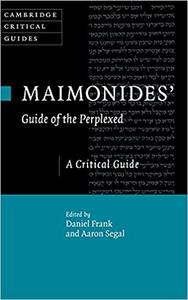 Moses Maimonides’ Guide of the Perplexed (c. 1190) is the greatest and most influential text in the history of Jewish philosophy. Controversial in its day, the Guide directly influenced Aquinas, Spinoza, and Leibniz, and the history of Jewish philosophy took a decisive turn after its appearance. While there continues to be keen interest in Maimonides and his philosophy, this is the first scholarly collection in English devoted specifically to the Guide. It includes contributions from an international team of scholars addressing the most important philosophical themes that range over the three parts of this sprawling work – including topics in the philosophy of language, metaphysics, epistemology, philosophy of law, ethics, and political philosophy. There are also essays on the Guide’s hermeneutic puzzles, and on its overall structure and philosophical trajectory. The volume will be of interest to philosophers, Judaists, theologians, and medievalists.