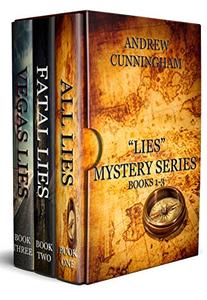 The first three books in the bestselling “Lies” Mystery Series!

His great-grandfather stole it 85 years ago… Now they want it back! One crime, committed decades before Del Honeycutt was born, changes his uneventful life to one of mystery and adventure–and pairs him up with bestselling mystery author Sabrina Spencer. In Books 1-3, Del and Sabrina try to solve the 85-year-old mystery; lock horns with a serial killer; and find themselves in a desperate race to rescue five kidnapped girls. “Don’t miss this one. You’ll find mystery, suspense, adventure, and even romance.” – Mystery Suspense Reviews

A seemingly innocent date gone tragically wrong plunges Del Honeycutt into a web of murder, lies, greed, and a hidden fortune dating back to a crime committed 85 years earlier by his great-grandfather.

Accompanied by Sabrina, the sister of Del’s brutally murdered date, a violent journey of discovery and fear begins. Pursued by vicious killers intent on eliminating anyone with knowledge of the 85-year-old crime, their only hope of survival is to find the reason behind the original crime and why, decades later, someone is still willing to kill to keep it hidden.

But Sabrina is concealing a monstrous lie of her own. Is she who she says she is?

She was murdered … twice!

Daisy Leduc was forgotten and alone. That was just how she wanted it. But when she is discovered stabbed to death in a dusty little Texas town, it plunges Del Honeycutt and bestselling mystery author Sabrina Spencer into a 30-year-old mystery involving murder, hidden identities, dangerous family secrets, political intrigue, and a long-forgotten serial killer.

When they discover that Daisy, under a different name, supposedly died 30 years earlier, they find themselves squarely in the crosshairs of killers whose deadly secrets lie in Daisy’s mysterious past.

Five teenage girls from a small town in Oregon disappear without a trace.

Were they kidnapped, or have the five friends perpetrated a massive hoax? Nine hundred miles away in Las Vegas, a woman with a dark secret vanishes on her way to meet friends for dinner.

Those friends are Del Honeycutt and bestselling mystery author Sabrina Spencer, in Las Vegas for a book convention. As Del and Sabrina investigate their friend’s disappearance, they are convinced that she has been abducted, and they begin to uncover the secrets that might have triggered her abduction, secrets that now put Del and Sabrina’s lives in jeopardy.

When clues indicate that the five missing girls might also be in Las Vegas, the situation takes a new turn, directly into the unthinkable.

Once again, Del and Sabrina find themselves in deep trouble and marked for death, and they only have a few hours to solve the case or their friend and the five young girls will be gone forever.