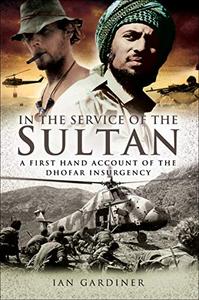 A memoir of how a small number of British officers led Muslim soldiers in the hard-fought anti-insurgency war that has shaped today’s Gulf.

While the Americans were fighting in Vietnam, a struggle of even greater strategic significance was taking place in the Middle East: the Sultanate of Oman guards the entrance to the Arabian Gulf, and thus controls the movement of oil from that region. In the 1960s and 70s, the Communists tried to seize this artery and, had they succeeded, the consequences for the West and for the Middle East would have been disastrous – and yet, few people have ever heard of this geo-political drama at the height of the Cold War.

In the Service of the Sultan tells, first-hand, the largely unknown story of a small number of British officers who led Muslim soldiers in this hard-fought anti-insurgency war which has shaped today’s Gulf. After outlining the historical, geographical and political background, the book describes military action in a stark and mountainous environment, including operations with irregular forces and the SAS as well as action in the air and at sea. The book gives a gripping, moving, funny account of all these and paints a powerful and illuminating picture of the realities of war.

It will appeal to all who are interested in the Cold War and relationships between the Western and the Arab worlds. Politics, history, irregular warfare, religion, international affairs: all are ingredients in this absorbing, informative read. In the light of the current insurgencies in Iraq and Afghanistan, it is also timely to be reminded how a rare victory was won over Communist guerrillas.