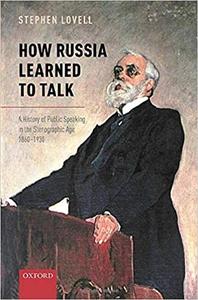 Russia in the late nineteenth century may have been an autocracy, but it was far from silent. In the 1860s, new venues for public speech sprang up: local and municipal assemblies, the courtroom, and universities and learned societies. Theatre became more lively and vernacular, while the
Orthodox Church exhorted its priests to become better preachers. Although the tsarist government attempted to restrain Russia’s emerging orators, the empire was entering an era of vigorous modern politics. All the while, the spoken word was amplified by the written: the new institutions of the 1860s
brought with them the adoption of stenography. Russian political culture reached a new peak of intensity with the 1905 revolution and the creation of a parliament, the State Duma, whose debates were printed in the major newspapers. Sometimes considered a failure as a legislative body, the Duma was a
formidable school of modern political rhetoric. It was followed by the cacophonous freedom of 1917, when Aleksandr Kerensky, dubbed Russia’s ‘persuader-in-chief’, emerged as Russia’s leading orator only to see his charisma wane. The Bolsheviks could boast charismatic orators of their own, but after
the October Revolution they also turned public speaking into a core ritual of Soviet ‘democracy’. The Party’s own gatherings remained vigorous (if also sometimes vicious) throughout the 1920s; and here again, the stenographer was in attendance to disseminate proceedings to a public of newspaper
readers or Party functionaries.

How Russia Learned to Talk offers an entirely new perspective on Russian political culture, showing that the era from Alexander II’s Great Reforms to early Stalinism can usefully be seen as a single ‘stenographic age’. All Russia’s rulers, whether tsars or Bolsheviks, were grappling with the
challenges and opportunities of mass politics and modern communications. In the process, they gave a new lease of life to the age-old rhetorical technique of oratory.