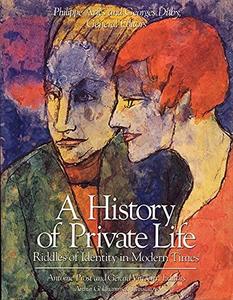 This is the final volume of an already standard work on private life in Western civilization from Greco-Roman times to the present. The entire work was planned by Phillipe Ariès and Georges Duby in the tradition of the Annales group; this volume was first published in France as Histoire de la vie privee: de la Première Guerre mondiale à nos jours (1987). Editors Prost and Vincent have added sections on Italian, German, and American families to this English edition, thereby making it more comprehensive. Like the previous four volumes (v.l: CH, Jun’87; v.3: CH, Oct’89), this one has a theme–personal identity. The editors and authors pursue this theme in the same contexts used in the earlier volumes: in the workplace and the city, where private property and private activities have been subjects of controversy and objects of state control; in the home and family, where, increasingly, even sexual matters are not private; and in middle groups between state and individual–such as church. or mosque, or party–where more and more personal dramas are acted out in a world of cultural diversity. As Duby’s foreword in the first volume indicated, A History of Private Life aims at an in-depth analysis of the evolution of personality as concept and reality in the Western world. Now complete in French and in English translation, the work is a tribute to the Annales approach of studying structural changes over long periods and to the late great historian Ariès, on whose schema Duby and the other editors drew.–Reviewed by T. J. Knight in Choice, 29 (April 1992), p. 1282.