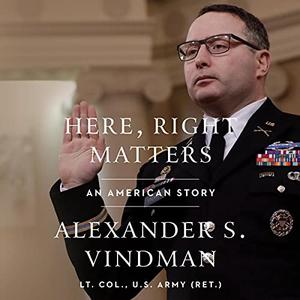 Retired US Army Lieutenant Colonel Alexander Vindman, who found himself at the center of a firestorm for his decision to report the infamous phone call that led to presidential impeachment, tells his own story for the first time. Here, Right Matters is a stirring account of Vindman’s childhood as an immigrant growing up in New York City, his career in service of his new home on the battlefield and at the White House , and the decisions leading up to, and fallout surrounding, his exposure of President Trump’s abuse of power.

0900, Thursday, July 25, 2019: President Trump called Ukraine’s President Zelensky, supposedly to congratulate him on his recent victory. In the months that followed, the American public would only learn what happened on that call because Alexander Vindman felt duty-bound to report it up the chain of command: that the President of the United States had extorted a foreign ally to damage a political challenger at home. Vindman’s actions and subsequent testimony before congress would lead to Trump’s impeachment and affirm Vindman’s belief that he had done the right thing in the face of intense pressure to stay silent. But it would come at an enormous cost, straining relationships with colleagues, superiors, and even his own father, and eventually end his decorated career in the US Army, by a Trump administration intent on retribution.