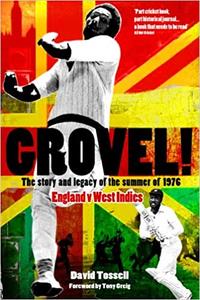 When England cricket captain Tony Greig announced that he intended to make the West Indies “grovel,” he lit a fire that burned as intensely as the sunshine that made 1976 one of the most memorable summers in British history. Spurred on by what they saw as a deeply offensive remark, especially from a white South African, Clive Lloyd’s touring team vowed to make Greig pay. In Viv Richards, emerging as the world’s most exciting batsman, and fast bowlers Michael Holding and Andy Roberts they had the players to do it. Featuring interviews with key figures from English and West Indian cricket, Grovel!: The Story and Legacy of the Summer of 1976 provides a fascinating study of the events and social issues surrounding one of the sport’s most controversial and colorful tours—as well as addressing the decline of West Indies cricket and its loss of support in the new century.