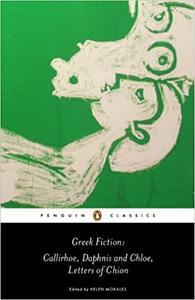 In this collection of Greek fiction written between the first and fourth centuries AD, ‘Callirhoe’ is the stirring tale of star-crossed lovers Chaereas and Callirhoe, torn apart when she is kidnapped and sold as a slave, while ‘Daphnis and Chloe’ tells of a boy and girl abandoned at birth, who grow up to fall in love and battle pirates. Greek Fiction – also containing ‘Letters of Chion’, an early thriller about tyranny and a political assassination – is a fascinating glimpse into an alternative view of Ancient Greece’s literary culture.