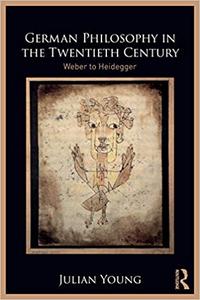 The course of German philosophy in the twentieth century is one of the most exciting, diverse and controversial periods in the history of human thought. It is widely studied and its legacy hotly contested.
In this outstanding introduction, Julian Young explains and assesses the two dominant traditions in modern German philosophy – critical theory and phenomenology – by examining the following key thinkers and topics:
Max Weber’s setting the agenda for modern German philosophy: the ‘rationalization’ and ‘disenchantment’ of modernity resulting in ‘loss of freedom’ and ‘loss of meaning’
Horkheimer and Adorno: rationalization and the ‘culture industry’
Habermas’ defence of Enlightenment rationalization, the ‘unfinished project of modernity’
Marcuse: a Freud-based vision of a repression-free utopia
Husserl: overcoming the ‘crisis of humanity’ through phenomenology
Early Heidegger’s existential phenomenology: ‘authenticity’ as loyalty to ‘heritage’
Gadamer and ‘fusion of horizons’
Arendt: the human condition
Later Heidegger: the re-enchantment of reality.
German Philosophy in the Twentieth Century: Weber to Heidegger is essential reading for students of German philosophy, phenomenology and critical theory, and will also be of interest to students in related fields such as literature, religious studies, and political theory.