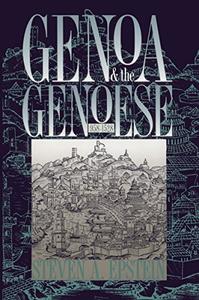 Set in the middle of the Italian Riviera, Genoa is perhaps best known as the birthplace of Christopher Columbus. But Genoa was also one of medieval Europe’s major centers of trade and commerce. In Genoa and the Genoese, 958-1528, Steven Epstein has written the first comprehensive history of the city that traces its transformation from an obscure port into the capital of a small but thriving republic with an extensive overseas empire.

In a series of chronological chapters, Epstein bridges six centuries of medieval and Renaissance history by skillfully interweaving the four threads of political events, economic trends, social conditions, and cultural accomplishments. He provides considerable new evidence on social themes and also examines other subjects important to Genoa’s development, such as religion, the Crusades, the city’s long and combative relations with the Muslim world, the environment, and epidemic disease, giving this book a scope that encompasses the entire Mediterranean.

Along with the nobles and merchants who governed the city, Epstein profiles the ordinary men and women of Genoa. Genoa and the Genoese, 958-1528 displays the full richness and eclectic nature of the Genoese people during their most vibrant centuries.